Sonny with a Chance

So Far, So Great by Demi Lovato

Sonny with a Chance is an American children's sitcom which aired on Disney Channel, created by Steve Marmel, that follows the experiences of teenager Sonny Munroe, portrayed by Demi Lovato, who becomes the newest accepted cast member of her favorite live comedy TV show, So Random!. The series debuted on February 8, 2009, in the United States. This is the first Disney Channel Original Series to be shot and aired in high-definition from the beginning; like most of Disney Channel's sitcoms, it is shot on tape but uses a "filmized" appearance. In the second season, some scenes are shot on location. The series is one of three Disney Channel Original Series to feature a show-within-a-show, with the others being the famous Jett Jackson and Shake It Up. The series officially ended on January 2, 2011, due to Demi's departure from her role. It was decided later that the series would continue without Lovato under the name So Random!. 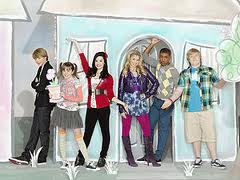 Sonny is a friendly, eccentric and well-intentioned teenage girl from Appleton, Wisconsin who lands the main role on her favorite comedy sketch TV show, So Random!. She is a rising star of the ensemble cast and works hard to be the best comedian she can be. Sonny often tries to solve the ongoing feud between the Mackenzie Falls and So Random! casts, especially when she dates the star of "Makenzie Falls," Chad Dylan Cooper. She was Chad's girlfriend as of the episode(s) "Falling for the Falls" until they split in "Sonny with a Choice." As seen in further episodes, all of her co-stars are very fond of her.

Tawni is a main cast member of "So Random!" She originally feared Sonny was moving in on her spotlight and acted meanly towards the newcomer. However, after a while, the two become best friends. Tawni is a diva; she loves mirrors, make-up, and everything about herself. Tawni can't go for more than 3 hours without looking at herself in the mirror. In one episode, she took up a challenge of not looking at herself and it was VERY messy...She is self-centered, but also talented and has a soft side. She is a similar personality to Chad. She only wears Coco Mocho Coco lipstick, as stated in many episodes. Tawni also wears hip clothes on the show.

Chad is a teen heartthrob as the star on Mackenzie Falls, the rival teen TV series of So Random!. He is egotistical and quite self-centered. He has a soft side, which he usually only shows to Sonny. He was Sonny's boyfriend as of the episode(s) "Falling for the Falls" until they split in "Sonny with a Choice." As a result of this romance, he started to warm up to the So Random! cast and eventually started to "hang out" with them. It is shown that he still has feelings for Sonny in the episode after they split. In the first season, he was seen as a spoiled, vain young man, but in later episodes, he has changed to be more loving and kind. He chose Sonny over getting 1 million fans although he really wanted to be popular.

Nico is a cast member of So Random! who is best friends with Grady. He is always striking out with the girls and has a crush on Mackenzie Falls star Penelope, who constantly turns him down when he asks her out. A running gag throughout the series is Nico jumping into Grady's arms when he gets scared, like Scooby and Shaggy. He is said to have been discovered in a one-man-band.

Grady is a cast member of So Random!. He is best friends with Nico. Grady is always involved in strange plans with Nico. He is shown to be dull-witted, gullible and immature. He also comes up with very strange conclusions about certain situations. He loves to eat and hates exercising. He claims to be an expert lip-reader, but very often misreads his targets' mouths and comes up with non-sensical sentences. In the episode "The New Girl" he tells Nico that when he's around a girl that he believes likes him, he will turn into a Scotsman named Seamus McGregor. He has a big brother named Grant who is in college and is the leader of his own fraternity.

Zora is the youngest cast member of So Random!. She is very smart, mysterious, crazy, and clever. She is the most cunning of the 'So Random!' cast and is known as "the weird one". She often pops out of nowhere, surprising her friends. She is somewhat a detective and puts her skills to use in the "So Random" studio. She listens in on her friends' conversations and then shocks them by speaking to them about it later on. She appeared sporadically throughout Season 2. Her infamous hiding spot is the event of Sonny and Tawni's dressing room. Whenever there is a test for a class she is allowed to skip it. She once tried to tutor Sonny but Sonny kept daydreaming about the Check it out girls sketch.

The original working title for the series was Sketchpad!, and the original name for the main character was Molly Munroe. The show's title was later changed to Welcome to Mollywood. After the first publicity materials about the show were released, the lead character's name was then changed to Holli and the title changed once again to Welcome to Hollywood. The main character's name was later changed to Sonny Munroe, and the show's title was changed a final time to Sonny with a Chance. The name is a play on the words "Sunny with a chance of rain", as heard in weather forecasts, reflecting the many comical situations in which the cast find themselves in each episode. Sonny with a Chance has a show-within-a-show, So Random!, complete with fully produced sketches. The show's executive producer Bryan Robbins previously wrote for and served as an executive producer on the real-life kids sketch comedy series All That and The Amanda Show for Nickelodeon. Gary Marsh, president of entertainment, Disney Channel Worldwide, stated "This series is rooted in one of the core thematic attributes that we stand for, which is following your dreams, there also was the opportunity to do a hybrid show." The show began production on September 15, 2008, and the first season was taped at Stage 11 at NBC Studios in Burbank, California; for the second season, the show's production moved to Hollywood Center Studios in Hollywood, California, where The Suite Life on Deck, Wizards of Waverly Place and Jonas L.A. is also taped.

It was announced on November 12, 2010, that the third season would begin production without Lovato, due to her recovering from health issues. The series would now focus on the sketch/comedy/music-variety show So Random!, centering around guest stars, sketches, digital shorts, and musical performances, a similar format to Saturday Night Live, but targeted at a much younger audience.Production of the third season began on January 30, 2011. On April 19, 2011, People.com reported that Demi Lovato would not be returning for the third season. As a result, the show will be renamed So Random! and focus only on the sketches rather than the behind-the-scenes antics. As a result of Lovato's departure from sonny with a Chance, the series is the second Disney Channel original series to have it's lead actor/actress leave during the series' run (after So Weird), and the fourth Disney Channel series to have a main cast member leave the series during its run (with That's So Raven and Jonas L.A. also included). The third season was then turned into its own new series based on its new format.

So Random! is a comedy sketch series that employs most of the main cast. It often causes the cast of Sonny with a Chance to dress in ridiculous costumes and act out nonsensical situations. This was spun-off to its own series after Lovato's departure.

Mackenzie Falls, The enemies of the So Random! group, a tween drama series featuring comedic overacting. The show is similar to Dawson's Creek and Degrassi, among others. The show's name, Mackenzie Falls, comes from Chad's character's name and the name of the town (which is located near a waterfall). In the season two episode "The Legend of Candy Face", the cast of So Random! made a parody of Mackenzie Falls titled Mackenzie Stalls, which was set in a bathroom. Minisodes and promos can be seen on the Sonny with a Chance website.

The show's theme song "So Far, So Great", was written by Jeanne Lurie, Chen Neeman, and Aristides "Aris" Archontis, who have each written songs for several artists on Disney-owned Hollywood Records. It is performed by a series actress Demi Lovato. The theme is of pop-rock style (the music cues composed by Scott Clausen and Christopher Lee, signaling scene changes and commercial breaks are styled similarly). A full-length version of this theme was released via the Radio Disney network on March 31, 2009, less than two months after the show's U.S. premiere. The theme song is also featured as a track on the Disney compilation album, Disney Channel Playlist, released by Walt Disney Records on June 9, 2009. It is also available as the 14th track on Lovato's second album Here We Go Again, released byHollywood Records on July 21, 2009. In the Russian version of the series ("Дайте Санни шанс" aka Give Sonny a Chance), the cast member's names are rendered in Cyrillic-- and the intro is performed by a different Russian girl in Russian (not by Demi Lovato). Otherwise, in translation, the intro music is not changed. In the Brazilian Portuguese version ("Sunny Entre Estrelas"), the intro music is sung in translation.

The Sonny with a Chance soundtrack was released on October 5, 2010, via Walt Disney Records. It was preceded by the single "Me, Myself and Time", which was released on August 3. This theme tune continued through the first season and second. 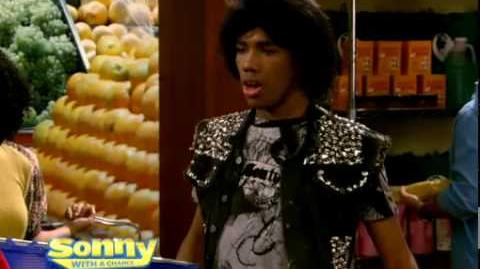 Exclusive Sneak Preview of Sonny with a Chance 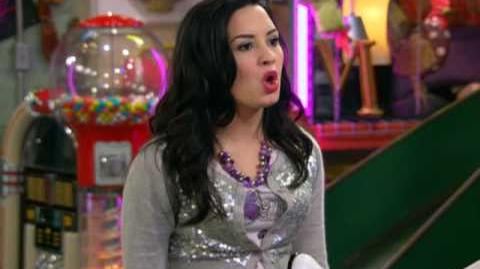 "Sonny With A Chance" New Episode 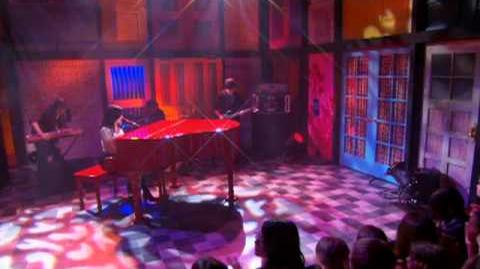 "Sonny With A Chance" - "Sonny Sings" 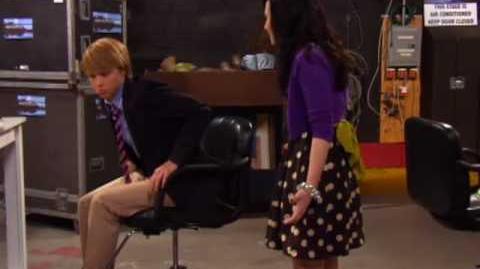 Sonny With A Chance - Falling for the Falls 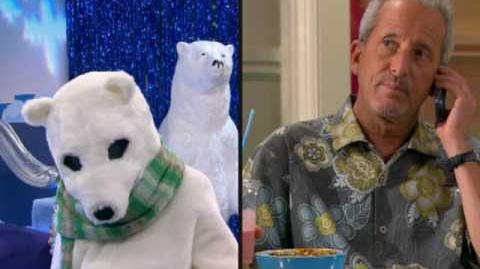 Sonny With A Chance "Problem Pauly" 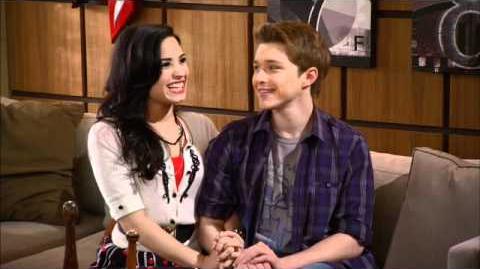 "That's So Sonny" with Rayven Symone 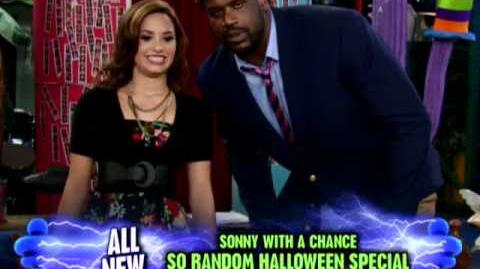 Sonny With A Chance So Random Halloween Shaq and Sonny Video 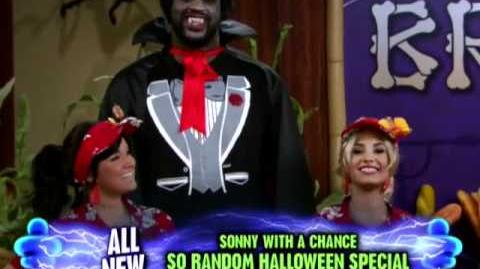 Sonny With A Chance So Random Halloween Shaq'ula Video
Retrieved from "https://demilovato.fandom.com/wiki/Sonny_with_a_Chance?oldid=23776"
Community content is available under CC-BY-SA unless otherwise noted.