The film is directed by Allison Liddi-Brown, filmed in Puerto Rico, written by Annie DeYoung and stars Demi Lovato and Selena Gomez.

Rosie Gonzalez (Demi Lovato) is about to be crowned queen of the small nation of Costa Luna. General Kane (Johnny Ray Rodriguez), the dictator of neighboring country Costa Estrella, infiltrates her palace with his agents during her coronation rehearsal and attempts to stage a coup d'etat against the royal family. Joe Mason (Tom Verica), an agent of the Princess Protection Program, a secret organization funded by royal families that looks after endangered princesses, whisks her away to safety via helicopter. Kane’s agents succeed in capturing her mother, Queen Sophia.

The Princess Protection Program hides Rosalinda in Mr. Mason’s home in Louisiana, where she is to pretend to be a typical American teenager named Rosie Gonzalez. She meets Mr. Mason's daughter, Carter Mason (Selena Gomez), an insecure girl who works at the family bait shop and dreams of going to the homecoming dance with her crush, Donny (Robert Adamson). Though Carter initially treats Rosie with annoyance and barely-masked hostility, she warms up to her after Rosie explains her situation, and the two become close friends. Carter teaches Rosalinda to act like a normal girl and Rosie shows Carter how to disarm those that scorn them by behaving like a princess. Rosie soon becomes popular at their high school.

In an attempt to trick Rosalinda into exposing her location, General Kane announces plans to forcibly marry Rosalinda’s mother. Rosalinda is distraught and tells Carter that she has decided to secretly return home. Knowing Costa Luna is still too dangerous, Carter secretly devises a plan to pose as Rosalinda and then use herself as bait to lure Kane into capture. Mr. Elegante, Rosalinda's royal dressmaker, tells Kane that Rosalinda will be attending the homecoming dance and will be wearing a blue dress that he actually sends to Carter. In the meantime, Rosalinda agrees to help Carter behave like a princess by helping a group of girls dresses up for the dance; The girls all wear masks, which helps Carter disguise herself as Rosalinda.

According to plan, Kane and his agents mistake Carter for Rosie and lead her to Kane's helicopter the night of the dance. However, Rosalinda narrowly discovers and ruins the plan by exposing herself to Kane, insisting that this is not Carter's fight. Fortunately, agents of the Princess Protection Program, including Mr. Mason, have been waiting inside the helicopter and rescue both girls. The PPP agents quickly apprehend Kane and his henchmen and turn them over to the international authorities.

In the end, Carter realizes what a jerk Donny is and goes to the dance with Ed, her best friend who has had a crush on her for a long time. Rosie is crowned Queen of Costa Luna with Carter, Mr. Mason, Ed, Rosalinda's mother, and Mr. Elegante in attendance. 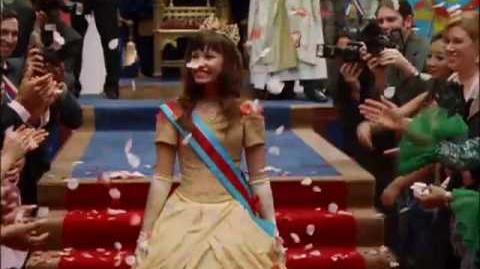