La La Land is a song recorded by American recording artist Demi Lovato. It was written by Lovato, Joe Jonas, Kevin Jonas II and Nick Jonas, and produced by the Jonas Brothers alongside John Fields, for Lovato's debut studio album, Don't Forget (2008). It was released as the album's second and final single on April 10, 2009, through Hollywood Records. "La La Land" is one of six songs on the album co-written by the Jonas Brothers, who also contributed backing vocals and guitars to the track. Lovato said that she wrote the song about being yourself in Hollywood and not letting other people change who you are. Musically, the song is a guitar-driven pop rock song and the lyrics speak of Lovato feeling "out of place" in Hollywood.

The song was met with positive reviews from critics. Commercially, "La La Land" peaked at number fifty-two on the Billboard Hot 100, and number thirty-five on the UK Singles Chart. The song achieved its highest peak in Ireland, where it reached number thirty on the Irish Singles Chart. It was less successful in Australia and Germany, where it peaked in the lower half of the charts. The accompanying music video was directed by Brendan Malloy and Tim Wheeler, and follows the song's Hollywood theme. It was used to promote Lovato's Disney Channel sitcom Sonny With a Chance, and features guest appearances from her co-stars.

"La La Land" is one of six songs on Lovato's debut album Don't Forget (2008) that she co-wrote with the Jonas Brothers. Lovato said that it was "important" to have them on her album, because "I mean, just look at how successful they are. I would love to have their input anytime, because they're obviously doing something right." The band also contributed backing vocals and played the guitar to the song. It was produced by the Jonas Brothers and John Fields, with the latter also playing the bass, guitars and keyboards. The song also features Devin Bronson, who provided a guitar solo, and Dorian Crozier, who played the drums.

In an interview, Lovato explained that the song is about being yourself when you are surrounded by "the pressures of fame". She said, "You get to Hollywood and a lot of times people can try to shape you and mould you into what they want you to be. The song is just about keeping it real and trying to stay yourself when you're out in Hollywood." "La La Land" was released as the album's second and final single on April 10, 2009. It was later released in the United Kingdom on May 31, 2009, with the new song "Behind Enemy Lines". A CD single was released on June 1, 2009, with a recorded live version of the Camp Rock song "This Is Me" from Jonas Brothers: The 3D Concert Experience.

"La La Land" is a guitar-driven pop rock song. According to the sheet music published at Musicnotes.com by Sony/ATV Music Publishing, the song is composed in the time signature of common time with a moderate beat rate of 84 beats per minute. It is written in the key of A major and Lovato's vocal range spans from the low-note of F♯3 to the high-note of E5. It has a basic sequence of F♯m–D–E as its chord progression. Lyrically, "La La Land" is about Lovato feeling "out of place" in Hollywood, demonstrated in lines such as, "Who said I can't wear my Converse with my dress?", and "I'm not a supermodel, I still eat McDonald's." Ed Masley of The Arizona Republic compared the track's theme to Miley Cyrus' "Party in the U.S.A.", and the guitars present in the song to works by English punk rock band The Clash.

Fraser McAlpine of BBC Music wrote a positive review of the song and rated it four out of five stars. He wrote, "So, essentially doing a song like this is rocky ground, but the good news is that Demi generally comes across as the kind of bright, scrappy, girl-next-door type, so it doesn't sound quite so preposterous when she insists that she's still quite normal, really." McAlpine concluded his review, writing, "You can almost hear the paparazzi cameras going off as she's singing. [...] Of course, the only thing she has to worry about now is that having made this very public declaration, if she slips up for a second, we'll all be watching..." Judy Coleman of The Boston Globe said that Lovato shows "her Gen-Y stripes", and "forcibly rhymes 'everything's the same' with 'the La-La land machine' – pronounced, of course,' ma-SHAYN'." Stephen Thomas Erlewine of Allmusic noted it as one of the best tracks on Don't Forget. Ed Masley of The Arizona Republic included "La La Land" at number eight on his "Top 10 from the Disney girls" list, and wrote, "Are Disney girls just naturally plagued by insecurity or is it all a plot to seem more real? Like Miley's "Party in U.S.A.," this song is all about how out of place Lovato feels in La La Land."

Lovato performed "Get Back" and "La La Land" at the Kids' Inaugural: "We Are the Future" event on January 19, 2009, in Washington D.C. at the Verizon Center. The event was held to celebrate the inauguration of Barack Obama as President of the United States. On April 7, 2009, Lovato performed "La La Land" on the eighth season of Dancing with the Stars. During the performance, Benji Schwimmer and Tori Smith danced along. Annie Barrett of Entertainment Weekly was negative on Lovato's vocal delivery due to her "half-growling" and "half-caterwauling". However, Barrett wrote that "the frantic nature of both song and dance complemented each other quite nicely." On April 25, 2009, Lovato performed the song on the final episode of singing competition My Camp Rock (UK), where she also presented the award to the winner, Holly Hull.

Well, some may say I need to be afraid
Of losing everything
Because of where I
Had my start and where I made my name
Well, everything's the same
In the la-la land machine
Machine, machine

Who said I can't wear my
Converse with my dress
Well, baby, that's just me [ah]
Who says I can't be single
And have to go out and mingle
Baby, that's not me

Well, some may say I need to be afraid
Of losing everything
'cause of where I
Had my start and where I made my name
Well, everything's the same
In the la-la land...

Tell me, do you feel the way I feel
'Cause nothing else is real
In the la-la land machine

Well, some may say I need to be afraid
Of losing everything
Because of where I
Had my start and where I made my name
Well, everything's the same
In the la-la land machine

The music video for "La La Land" was directed by Brendan Malloy and Tim Wheeler. It was used to promote Lovato's then-upcoming Disney Channel sitcom, Sonny with a Chance. In an interview with MTV News, Lovato said that it "really describes the show. I'm excited about that." Speaking of the video, co-director Malloy said, "The idea for the video is to create this hyperreal world, that's the word we keep using, La La Land. Fame has definitely gotten to everybody's head. It's more like [Lovato] is the only one in this world that fame hasn't gotten to." According to Lovato, her Sonny with a Chance co-stars play "stereotypical Hollywood Los Angeles [...] big type of people." The clip premiered on December 19, 2008 on Disney Channel. It was released to the iTunes Store on January 20, 2009. Jefferson Reid of E! Online praised the video, writing, "Mocking Hollywood phonies is always cool by us, and bonus points to Demi Lovato for doing it while rocking out in admirable form. Skewering the "La La Land" machine with sass and grit, Disney's latest everygirl rock star seems like she might eventually give Miley Cyrus a real run for her money."

The video features appearances from Lovato's Sonny with a Chance co-stars Allisyn Ashley Arm, Doug Brochu, Sterling Knight, Michael Kostroff, Brandon Mychal Smith and Tiffany Thornton. The video begins with Lovato being interviewed on a talk show called Rumor Has It with Benny Beverly (Brochu). After introducing her to the audience, Beverly asks Lovato what it is like to be a star. A video is then shown to the audience, which serves as the main portion of the clip. In Hollywood, Lovato walks past a "Be-seen section," and bumps into a stranger on the street, which a paparazzo (Knight) takes a picture of. A woman then reads a tabloid magazine with Lovato and the "mystery man" on the cover. The video then cuts to Lovato and her Sonny with a Chance co-stars at a red carpet event, with paparazzi taking pictures of Lovato wearing Converse sneakers with a dress. Lovato is then shown on the set of a commercial for her perfume, in a pink wig with makeup being applied to her. She is uncomfortable and eventually refuses to cooperate, which angers the director (Smith). The video then cuts back to Rumor Has It with applause from the audience, and ends with Beverly praising Lovato. 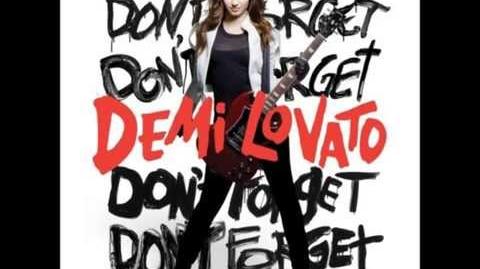 Retrieved from "https://demilovato.fandom.com/wiki/La_La_Land?oldid=21738"
Community content is available under CC-BY-SA unless otherwise noted.