"Irresistible" is a song by the American rock band Fall Out Boy. It was first released on January 5, 2015, as the second promotional single from their sixth studio album, American Beauty/American Psycho (2015). It debuted at No. 77 in the US and No. 70 in the UK. In February 2015, it was released as the band's third UK single, and a music video was released on February 19. "Irresistible" has been described as "arena rock" in sound. A remix version featuring Demi Lovato, was released on October 16, 2015.

The song is the first track on Fall Out Boy's sixth studio album American Beauty/American Psycho, and it runs a length of three minutes and twenty seconds. The song was written by Fall Out Boy and produced by Butch Walker and Jake Sinclair. Bassist Pete Wentz compared the mood of the song to a scene in the biopic Sid and Nancy. "When I think of "Irresistible", it brings this image to my head, whether it's fictional or real, of Sid and Nancy in an alley, garbage raining down on them in an eternal spiral of romance and poison. Sometimes it's hard not to love what can hurt us the most."

The song was released as a promotional digital download online on January 5, 2015, 15 days before the album's official U.S. release on January 20. On the day of the digital release, it reached the top of the iTunes download chart, which helped it debut and peak at No. 77 on the Billboard Hot 100 chart and No. 70 on the UK Singles Chart on the strength of digital downloads. In mid-February it was released as a UK single, following "Centuries" and "American Beauty/American Psycho" in the region. The song was used by WWE for their Extreme Rules (2015) event and is featured on a Heroes Reborn promotion.

A music video was released on February 19, 2015, to accompany the UK single release. It was directed by Scantron and Mel Soria. With the video's editing resembling that of a VHS recording with "cheesy" editing, it features the band members wearing "embarrassing" sports fashion as they challenge professional basketball players into a basketball game. The struggling band is severely defeated in the match. There are several times when the members of the band almost score, and audience members cheer for them and display signs such as "Not bad Joe" and other similar slogans. Finally, the band scores once in the end. The end of the video includes a clip of the short film Bedussey from Clandestine Industries Presents: Release The Bats, stylistically the previous layer of the VHS tape which Irresistible taped over. The music video references Patrick Stump's hand being chopped off in the video for "The Phoenix".

The remix version, featured Demi Lovato, was directed by Brendan Walter. The video starring Doug the Pug and referencing previous videos for "Centuries", "Sugar, We're Goin Down", "Dance, Dance", "Uma Thurman" and the original "Irresistible". A third video was released on January 5, 2016, for the version featuring Lovato. The video references the NSYNC music video for "It's Gonna Be Me" where the band members are dolls in a toy store. The Fall Out Boy dolls are rejected but form their own band. The video is directed by Wayne Isham and features cameos by Chris Kirkpatrick and Joey Fatone. 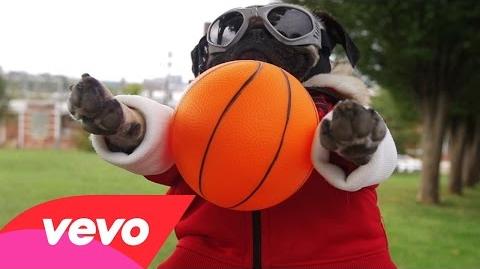 The song has received positive reviews from music critics, with many commenting on the anthemic nature of the song. MTV wrote positively of the song, calling it a "frantic twist of desperation, confidence and sadism with a chugging guitar, anthemic trombones and a shout-it-at-the-top-of-your-lungs chorus. Idolator commented that the song was "stadium-rocking" and full of "horn-and-synth glory". Rolling Stone complimented the song as well, stating that it is "an arena-pop anthem about deadly love." Spin described the song as a "booming, brass-backed anthem." Music Times called the song reminiscent of "My Songs Know What You Did in the Dark".

Coming in unannounced, drag my nails on the tile
I just follow your scent, you can just follow my smile
All of your flaws are aligned with this mood of mine
Cutting me to the bone, nothing left to leave behind
You ought to keep me concealed just like I was a weapon
I didn't come for a fight but I will fight til the ending
This will not be a battle, might not turn out okay
You know you look so Seattle but you feel so LA

I'm gonna get you to burst just like you were a bubble
Frame me up on your wall just to keep me out of trouble
Like a moth getting trapped in the light by fixation
Truly free, love it baby, I'm talking no inflation
Too many war wounds and not enough wars
Too few rounds in the ring and not enough settled scores
Too many sharks, not enough blood in the waves
You know I give my love a f-f-four letter name

You're second hand smoke, second hand smoke
I breathe you in, but honey I don't know what you're doing to me
Mon chéri but the truth catches up with us eventually
Try to say live, live and let live
But I'm no good, good at lip service
Except when they're yours, mi amor
I'm coming for you and I'm making war