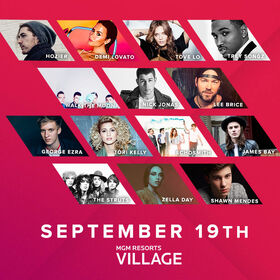 The iHeartRadio Music Festival is a two-day festival held each September since 2011 by iHeartRadio at the MGM Grand Garden Arena in Paradise, Nevada, (in 2013 the Village Stage was added). The 2011 edition was broadcast by VH1, while the 2012, 2013, and 2014 editions were broadcast by The CW. The shows get subsequent replays on Palladia.

The two-day festival was expanded in 2013 with the addition of the iHeartRadio "village", a separate event free to attend for those who won tickets to the main event or available for separate purchase. According to Billboard, the main festival "showcases some of the most well-established artists in the genre" while the village showcases newer, rising acts. In 2013, the magazine wrote that the festival had "quickly established itself as a home to every major artist."

Demi Lovato performed during the two days of the festival on September 18 and 19, 2015.

Retrieved from "https://demilovato.fandom.com/wiki/IHeartRadio_Music_Festival?oldid=16767"
Community content is available under CC-BY-SA unless otherwise noted.