View source
This article is about the album. For its track title, see Here We Go Again (song).

1. "Here We Go Again"
Released: June 23, 2009
2. "Remember December"
Released: January 18, 2010
Here We Go Again is the second studio album by American recording artist Demi Lovato, released on July 21, 2009, through Hollywood Records. Unlike their previous effort, Don't Forget (2008), Lovato did not enlist help from the Jonas Brothers as they wanted to work with different people and give the album a personal approach.

They collaborated with established songwriters and producers such as E. Kidd Bogart, Gary Clark, Toby Gad, John Mayer, Jon McLaughlin, and Lindy Robbins. The majority of the album was produced by John Fields, who helped production on Don't Forget. Lovato penned a song called "For the Love of a Daughter" with The Academy Is... lead singer William Beckett about their relationship with their estranged father, but the subject was deemed too intense for their young audience, and it was removed from the album's tracklisting. The song was later passed on to their third studio album, Unbroken (2011).

Musically, Here We Go Again derives mainly from the genres of pop-rock and power pop, mixed with influences of R&B and synthpop. Lovato wanted the album's music to be less rock and more mellow than their previous album while exploring more mature sounds and lyrics. The critical reception of the album was positive; critics praised Lovato for not relying on vocal manipulations and instead of showing off their natural ability.

Although some critics called the album catchy, others felt that it was predictable and at times too much like Kelly Clarkson. Here We Go Again sold 108,000 copies during its first week of release in the United States and debuted atop the Billboard 200. This is their first number 1 album in the country. Since its release, the album has sold 475,000 copies in the US. Internationally, the album peaked inside the top 40 on charts in Australia, Brazil, Canada, Greece, Mexico, New Zealand, and Spain.

Here We Go Again was released in June 2009 and was Lovato's first solo single to crack the top 40 on the Billboard Hot 100, peaking at number 15.

The album's second and final single, "Remember December", was released internationally in January 2010. To promote the album, Lovato embarked on their first headlining tour, Summer Tour 2009.

Lovato was discovered by the Disney Channel during an open call audition in their hometown of Dallas, Texas and made their debut on the short series As the Bell Rings in 2007.[1] They subsequently auditioned for a role on the television series Jonas, but did not get the part.[1] Instead, they received the main role in the television film Camp Rock after singing for the network executives.[1] Later, they auditioned for a role on the series Sonny With a Chance, which they also received.[2] Lovato enlisted the Jonas Brothers, their Camp Rock co-stars, to work with them on their debut studio album, Don't Forget (2008). The writing began during filming of Camp Rock in 2007 and continued on the band's Look Me in the Eyes Tour in 2008.[2][3] Lovato wanted to establish theirself as a musician with the album, and not being known as just "the girl from Camp Rock."[2] They said that their goal was to have fun on the album and that they would tackle deeper themes on their sophomore effort.[4]

The album was released in September 2008 and debuted at number two on the Billboard 200 chart.[5] Lovato recalled the experience, "It was like, O.K., you've done it. You're no longer just succeeding because you're in a movie with the Jonas Brothers. These people bought your music for you."[1] Later in February 2009, Lovato's first headlining sitcom, Sonny with a Chance, premiered on Disney Channel.[1] Don't Forget was certified Gold by the Wikipedia:Recording Industry Association of America (RIAA)[6] and spawned three singles, "Get Back", "La La Land", and its title track "Don't Forget".[1] In January 2009, Lovato announced to MTV News that they had already begun writing songs for their second studio album, as well as revealing its approach: "It's going to take a different sound, so hopefully it goes over well. I sing a lot of rock, but this time I want to do more John Mayer-ish type of songs. Hopefully I can write with people like him. I love their music — it would be amazing."[7]

In January 2009, Lovato began to work and record on their second album, right after filming from the first season of Sonny with a Chance. In April 2009, Lovato explained the album's process and collaborating with songwriters including Jon McLaughlin and The Academy Is... lead singer William Beckett. According to Lovato, the album's writing process was nearly finished in just two weeks, noting that they "basically went from full-time acting mode to full-time album mode". As they wanted to accomplish more "John Mayer-ish type of songs", they contacted Mayer's management in order to collaborate with him, citing him as one of their biggest musical influences. Mayer accepted the offer, of which Lovato said, "I was completely shocked [that he said yes]. It was more of a pipe dream. I didn't ever think it would be a reality, but it came true. He was taking a chance on working with a younger artist in the pop realm." The two wrote three songs together, "World of Chances", "Love Is the Answer" and "Shut Up and Love Me". Lovato said that it was intimidating to work with him as they were worried that he would not like their lyrics, and they would get "super excited" whenever he complimented them. "World of Chances", the first song they wrote with Mayer, was the only of these songs to make the album's final cut. The song was inspired by Lovato's first experience of love and heartbreak.

Lovato collaborated with Beckett on a song titled For the Love of a Daughter. Although not planning to write a personal song, a "really long talk" with Beckett resulted in the song being written. The song chronicles Lovato's relationship with their estranged birth father, who left the family when they were two years old. In the song, they plead their father to "put the bottle down" and question him: "How could you put your hands on the ones that you swore you loved?" The song was set to appear on the album, but Lovato and their management felt that the song's subject would be too much for their young audience. In an interview with Women's Wear Daily, they explained: "When I took a step back, I realized I wouldn't like those subjects being talked about in somebody else's home, with a seven-year-old and their mom." Several other "emotional" songs were also put on hold. "For the Love of a Daughter" was later revealed to appear on Lovato's third studio album, Unbroken, released in September 2011 when Lovato had left Disney Channel.

Unlike their first studio album, Don't Forget, Lovato did not collaborate with the Jonas Brothers on Here We Go Again as they wanted to see what their sound would be like without their input. "They were the only people I'd ever written with. Once I wrote with different people, I wanted to go with that", they told the New York Daily News. They said that their first album was "very Jonas" and that Here We Go Again is "a little bit more like what's coming from my heart. It's more for me." However, Lovato did work with Nick Jonas on the song "Stop the World". The majority of the album was produced by John Fields, who also handled production on Don't Forget. Other tracks were produced by SuperSpy, Gary Clark, Andy Dodd, and Adam Watts. "Catch Me" is the only song on the album for which Lovato received a sole writing credit. In an interview with The New York Times, they revealed that they wrote it in their room and that it means more to them than the rest of the album. 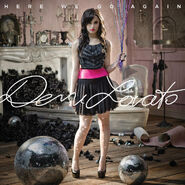 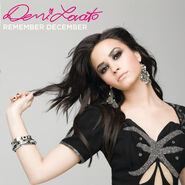 In the United States, Here We Go Again debuted at number one on the Billboard 200 chart with 108,000 copies sold in its first week. The figure was an improvement over the first-week sales of Don't Forget, which moved 89,000 copies. The feat made Here We Go Again the fourth album of 2009 under the Disney Music Group to peak at number one. In its second week, the album fell to number eight with 39,000 copies sold. At the end of 2009, the album ranked at number 109 on Billboard's year-end chart. In February 2010, it had sold 369,000 copies in the United States, according to Nielsen SoundScan. In Canada, the album entered the Canadian Albums Chart at number five and stayed on the chart for five weeks.