Demi Lovato Wiki
Register
Don't have an account?
Sign In
Advertisement
in: Pages with reference errors, Tell Me You Love Me, Albums

Demi Lovato Wiki:Tell Me You Love Me ( The fall album and at school

Tell Me You Love Me
Studio album by Demi Lovato

Tell Me You Love Me is the sixth studio album by American singer Demi Lovato. It was released on September 28, 2017, by Island, Hollywood, and Safehouse Records.[1] Primarily a pop record, the album also incorporates elements of R&B. Lovato described the album as having a more "soulful" side than their previous work, and named Christina Aguilera, Aretha Franklin, and Kehlani as its major influences. Contributions to the album's production came from several producers, including Mitch Allan, David Massey, Oak Felder, Stint, and John Hill.

Lyrically, Tell Me You Love Me explores themes of recovering from heartbreak, letting go of past demons, and being single.[2] The album's lead single "Sorry Not Sorry", released on July 11, 2017, went on to become Lovato's highest-charting single in the United States, peaking at number six on the Billboard Hot 100 and being certified 5× Platinum by the Recording Industry Association of America (RIAA).[3] The title track was released as the album's second and final single on November 14, peaking at number 53 on the Billboard Hot 100 and later being certified Double Platinum by the RIAA.[4]

Tell Me You Love Me received generally positive reviews from music critics, who praised its production and the emotion in Lovato's vocal performance, with some deeming it their finest album to date. It peaked within the top ten in numerous countries worldwide, peaking at number three on the US Billboard 200. In support of the album, Lovato embarked on the Tell Me You Love Me World Tour in 2018.[5]

Following the release of their fifth studio album Confident in October 2015,[6][7] Lovato told Latina that their follow-up album would have a "more soulful vibe".[8] In October 2016, they announced via Twitter that they would be taking a break from music and the spotlight in 2017, stating "I'm not meant for this business or the media".[9] However, they revealed to Mike Adam in August 2017 that after doing charity work earlier that year, they felt rejuvenated and started creating music again, which eventually led to an album. The singer mentioned that a title and release date had been chosen, but they were not allowed to disclose them at the time.[10]

Lovato also told MTV News that month they were influenced by many artists for Tell Me You Love Me, including Aretha Franklin, Christina Aguilera, and Kehlani.[11] They stated that the album was heavily inspired by Aguilera's album Stripped, calling it "a breakout album that really transformed her into the icon that she is today".[12] Lovato stated that they worked with producers Pharrell Williams and Mike Will Made It, but their work would not be featured on the album.[11]

See also: Tell Me You Love Me World Tour

On August 23, 2017, Lovato posted an 18-second video to their official Twitter account. In the video, they are seen singing the title track, "Tell Me You Love Me", in a recording studio. As the camera pans out, the footage appears to be reflected on Lovato's eye while zooming further back and unveiling the standard edition album cover; a black and white close-up photo of their face with the album title underneath. The album cover is then dimmed, to reveal the release date of September 29, 2017. Along with the video and release date, Lovato also announced that the album would be available for pre-order at midnight on August 24, 2017.[13][14] On September 13, 2017, Lovato unveiled the tracklist with help from their fans on Twitter.[15]

On September 29, 2017, Lovato celebrated the album by hosting a live stream event with Vevo, where they discussed the album and delivered acoustic performances of "Sorry Not Sorry" and "Tell Me You Love Me".[16] Lovato also partnered with audio electronics company JBL to host a pop-up exhibition in New York City, showcasing the album's editorial photography and custom murals inspired by the album, created by contemporary painter Lora Zombie.[17] 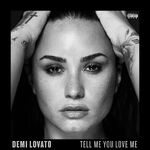 "Tell Me You Love Me"

Tell Me You Love Me received generally positive reviews from music critics. On Metacritic, which assigns a normalized rating out of 100 to reviews from mainstream critics, the album received an average score of 72 based on six reviews, indicating "generally favorable reviews".[27] Album of the Year assessed the critical consensus as a 65 out of 100, based on 35 reviews.[26]

For Pitchfork, Jamieson Cox stated that Lovato "has finally settled into a consistently compelling space: flinty, flirty R&B that's just as thrilling hushed as it is at full blast", and noticed the improvement over their previous works: "It gives you enough space to see Demi as something other than a no-holds-barred belter. You want to get to know the Lovato behind Tell Me You Love Me, something you can't definitively say about any of her other releases".[34] Stephen Thomas Erlewine of AllMusic wrote that the album "runs the gamut from churchy soul to seductive slow-burners to showstopping ballads designed to showcase every single one of Lovato's diva moves", giving the album 3.5 out of 5 stars.[28] The Herald Sun rated the album 3.5 out of 4 stars, deeming it "impressive" and felt "Daddy Issues" was the best track.[30] Writing for Idolator, Mike Nied gave the record 4 stars out of 5 and stated that "Demi finally hits her stride" with the album. He added "Instead of sprinkling one or two hits among a lot of filler, the hitmaker has finally recruited the right team and found her voice over sparkling mid-tempos and frenetic bangers. The album has the distinction of being her most cohesive and is one of the strongest to drop in 2017" and compared the album to Christina Aguilera's Stripped.[31]

In a positive review, Aidin Vaziri of the San Francisco Chronicle wrote that Lovato "feels jilted, and conjuring the battle cries of pop predecessors like Christina Aguilera and Kelly Clarkson, she unleashes on exes and backstabbing friends with the kind of vocal firepower best appreciated from a safe distance".[36] Los Angeles Times writer Mikael Wood praised the album's tracks as "catchy and funny and sexy and daring", and wrote that Tell Me You Love Me "presents a singer burning with purpose".[32] For Entertainment Weekly's editor Tim Snatc, Tell Me You Love Me "suffers for some of its excessive vocal fireworks." Giving the album a B rating, he felt that the best parts of the album are "on the first half and showcase Lovato's swagger, especially the standout gospel-tinged title track."[29] Writing for Rolling Stone, Maura Johnston stated the album "gets bogged down" in chilled-out trap pop. She later commented slow-tempo tracks like "Concentrate" balanced the downtempo and the energetic tracks.[35]

On December 4, 2017, Time ranked the best albums of 2017, and gave an honorable mention to the album, noting "Lovato's full-throated pop on Tell Me You Love Me" and acclaiming Lovato for "stepping outside of comfort zones and creating new pathways for music to follow".[38]

In the United Kingdom, Tell Me You Love Me debuted at number five on the UK Albums Chart, becoming their highest charting album in the nation.[46] The record entered at number eight in Australia, becoming their second top 10 album on the ARIA Albums Chart after Confident reached number three.[47] The album opened at number three on the US Billboard 200 with 79,000 album-equivalent units, which consisted of 48,000 pure sales, and became their sixth consecutive top five entry on the chart after all five of their previous studio efforts charted within that range.[48] In Canada, it arrived at number 4 and became their fifth consecutive album to reach the country's top five.[49] In August 2018, the record was certified Platinum in the US, becoming Lovato's second album to achieve this milestone, before 2015's Confident achieved the status in early 2020.