The album debuted at #3 on the Billboard 200 with the first-week sales of 116,000 copies—the highest first-week album sales of Demi's career.[3] The album also reached the top five in Canada, Ireland, Italy, Mexico, and Spain.

In April 2012, Lovato began writing songs for their fourth studio album, following the commercial success of their third studio album Unbroken (2011). The album was recorded during Lovato's appearance as a mentor during the second season of The X Factor.[4] Lovato chose the title of the album Demi, because it was their first album intended for a more mainstream audience, and those who did not know their music.[5] Lovato also explained a "sequel" of the song "Skyscraper" (2011) is included. After the album was released, it was revealed that "Warrior" was intended to be a sequel of "Skyscraper".[6] They stated "I'm incredibly proud of this album" and "It's better than anything I have ever done! I experimented with a variety of different sounds and poured my heart into writing these songs. I'm so excited for everyone to finally get the chance to hear them!"[7] On May 6, 2013, Lovato asked their Twitter followers to "unlock" the entire album by putting song titles in hashtags. A special website lovaticsspeeduptime.com was launched, displaying all the songs next to a clock that would turn as tweets would be sent. Once a song became a trending topic, its YouTube video was made available on VEVO. All the songs were unlocked within four hours.[8][9] An iBooks-exclusive e-book titled Demi: The Book was released on June 11, 2013. The book gives fans behind-the-scenes access to the singer, including never-before-seen footage and interviews. In one clip, they said that being honest and open is not only the message they're sending their fans in the book but also on their album. They said, "This album I've had enough time to really reflect on personal experiences and look back at my life after having overcome a bunch of things. I've been more aware of myself; therefore, when you listen to the album, you can really tell in the lyrics and in the emotion and everything I worked really, really hard on this album, and hopefully you'll be able to hear that."[10]

Lovato described Demi as "good old American pop music", which was deeply influenced by their breakout single "Give Your Heart a Break" and they felt the "super catchy" lyrics as well as the beat of the song resonated with fans, which they wanted to further explore on the album.[11] According to Lovato, their previous album Unbroken contained songs that they got sick of "a lot faster", so they wanted to "have songs that excited" them on Demi.[12] Musical genres on the album range from pop rock to synthpop and bubblegum pop.[2] Apart from "catchy songs" such as the mid-tempo track "Without The Love",[12] "emotional songs" are also included on Demi.[11] This is demonstrated on "Shouldn't Come Back" and "Warrior"; which Lovato states are too personal to perform live, comparing them to a song from Unbroken entitled "For The Love Of a Daughter".[13] Billboard states that "Warrior" has Lovato declaring theirself "a phoenix that has risen from all-too-public ashes", with emotional lyrics such as: "I've got shame, I've got scars, that I will never show/I'm a survivor, in more ways than you'll know".[2] Speaking of "Warrior", the singer stated: "That song was probably the hardest and easiest song to write on the album. I was writing about personal experiences, and it's the type of song where you can't fit all of it into one song".[14] The theme of Americanism on the album is evident on the track "Made In The USA", a patriotic love song inspired by "American love stories" in the 1930s.[15] The song incorporates pop, rock, and country.[16] Stripped down piano ballads on Demi includes, "In Case", which contains lyrics about heartbreak and "Nightingale".[17] The upbeat songs "Really Don't Care" and "Something That We're Not" are produced to suit of Lovato's "overpowering pipes".[2]

In June 2013, Lovato stated: "My life has changed so much. I am vulnerable and honest in this record, the way I've always wanted to be. I was ready to come out of the darkness". They referred to the writing process for the album as "therapeutic", further stating: "It helped me get rid of my demons, I am a warrior now. I've been through so much in the past years, it was hard to find the courage to get out of it and write about it, I was afraid no one would understand my message. I spent so much time trying to figure out what the right thing to do was, that I got distracted along the way by fun and temptations and that's why I ended up in rehab at 18".[18] 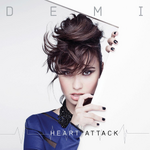 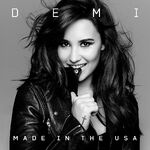 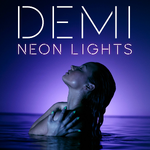 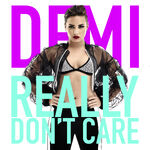 After the album's release in May 2013, Lovato announced they would not go on tour, instead choosing to return as a judge for the third season of The X Factor. In September 2013, Lovato announced The Neon Lights Tour due for a start in February 2014, once The X Factor had finished. It would mark Lovato's first arena tour. The tour included all girl opening acts, with Lovato stating "I want it to be about girl empowerment, I want it to be a huge part."[34] These opening acts included girl groups Fifth Harmony and Little Mix, as well as Cher Lloyd on select dates. The tour covered 41 shows in total across North and South America, as well as Canada and Mexico; beginning in Vancouver on February 9, and closing on May 17 in Monterrey.[35]

Not long after the closing of the Neon Lights Tour, Lovato announced their first world tour, entitled the Demi World Tour. The tour would bring new opening acts, Christina Perri and MKTO, as well as playing shows in bigger venues, such as the Staples Centre. It would mark the first time one of Lovato's albums had spawned two separate concert tours. The 2014 dates consisted of 25 shows across North America and Canada, with world tour dates due for 2015. The tour began on September 6 in Baltimore, with the first leg concluding on October 27 at the Barclays Center in New York City.[36] On November 28, 2014, Lovato announced shows in Australia and New Zealand, marking their first time performing in these countries. The leg consists of five shows beginning April 17 in Brisbane, and ending on April 26 in Auckland.[37] They went on to complete the tour with their most extensive Asian tour to date, performing a total of six shows. The tour concluded on May 19 in Ho Chi Minh City to a crowd of 50,000.[38]

On May 6, 2013, Demi asked their Twitter followers to "unlock" the entire album by putting song titles in hashtags. A special website lovaticsspeeduptime.com was launched, displaying all the songs next to a clock that would turn as tweets would be sent. Once a song became a trending topic, its YouTube video was made available on VEVO. All the songs were unlocked within four hours.[39][40] An iBooks-exclusive e-book titled Demi (book) was released on June 11, 2013.[41] Lovato also posted three videos on May 13, 14, and May 17, 2013, titled "The Story of Demi" to talk about their album. 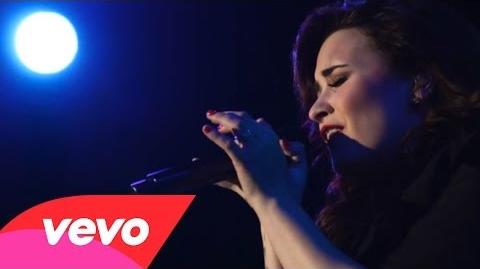 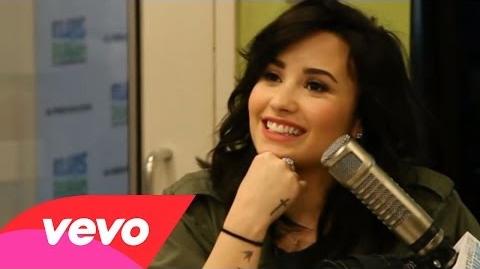 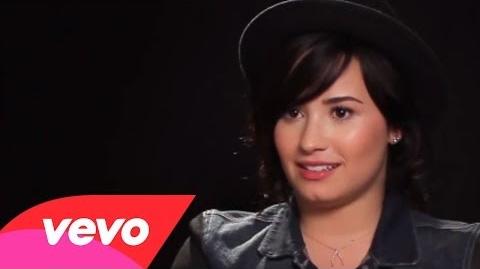 The album debuted at number three on the US Billboard 200 with first-week sales of 110,000 copies, behind Vampire Weekend's Modern Vampires of the City and George Strait's Love Is Everything, thus becoming the highest selling opening week of Lovato's career.[42] In the United Kingdom, the album debuted at number ten on the UK Albums Chart, with sales of 10,658 copies sold in its first week.[43] With the debut, it became their first album to breach the Top 40 in the country.[43] The album was certified Gold in the US on September 16, 2014.[44]

The album received generally positive reviews from music critics. According to review aggregator Metacritic, the album has a score of 64/100 based on 6 reviews. Jason Lipshutz from Billboard gave a positive review, saying that "the singer has a strong grip on her skills as a performer, but is still chiseling away at the formula that works best for her as an artist, and is unwittingly putting that self-discovery on display here."[2] Jon Caramanica from The New York Times also gave a positive review, saying that it is "[an] often impressive fourth album."[50] Stephen Thomas Erlewine from AllMusic gave a more mixed review, rating the album three stars out of five, saying that "Ultimately, this isn't an album of purpose, it's a collection of moments, and it has just enough good ones to solidify Demi Lovato's comeback."[46] Jody Rosen from Rolling Stone awarded the album three stars out of five, saying that "It's predictable stuff—sassy songs, lovelorn songs, a couple of pop-psych pep talks—but Lovato is good company, and her voice has gustiness and character."[48]

Melissa Maerz from Entertainment Weekly, however, gave the album a mixed review and graded it C+, saying that "it's too bad that her new album Demi, sounds like such a decisive return to teen pop. Transformed from an edgier young woman back into America's sweetheart."[17] Marc Hirsh from The Boston Globe was also mixed, saying that "Demi sounds like Lovato's grasping for hits, when she used to sound like she was making music and having fun."[51] Melinda Newman from HitFix gave the album a B-, commenting "The problem with Demi is that too much of the music here is so generic that it could be any teen queen delivering these tunes." However, she went on to conclude "For those who are looking for a largely uptempo album that fits squarely into much of the pop landscape on radio today, Demi will be a pleasing fit."[52] 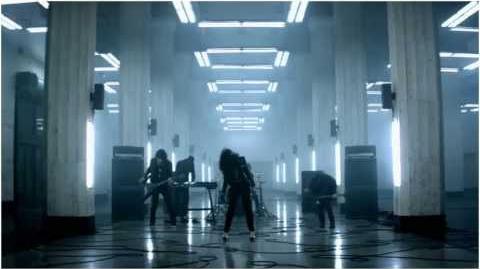