complex.com
Complex is a New York-based media platform for youth culture which was founded as a bi-monthly magazine by fashion designer Marc Ecko. Complex reports on trends in fashion, music, art and design, race, technology, sports and video games with a focus on niche cultures such as streetwear, sneaker culture, hip-hop, and graphic art. Complex currently reaches over 120 million unique users per month across its owned and operated and partner sites, socials and YouTube channels. Complex has won numerous accolades, including several from Business Insider such as Most Valuable Startups in New York and Most Valuable Private Companies in the World, as well as the Silicon Alley 100 for Complex CEO Rich Antoniello. In 2012, the company launched Complex TV, an online broadcasting platform that has won numerous awards and has found great success with original shows, such as Complex News, First Look music videos, Fashion Bros and Sneaker Shopping.

Demi Lovato was on October/November 2015 issue of Complex magazine.

Waiting for Demi Lovato to show up feels like waiting for your high school prom date in her parents’ living room. Only instead of a living room, it’s the tree-shrouded courtyard of an office in Los Angeles, and instead of her parents, it’s her management team all staring at you and firing off questions. “Where are you from?” they ask. “How long have you lived in New York?” “What do you do?” “What are your intentions with our Demi?” That last question might have been next, had the 23-year-old pop singer with a big voice not arrived just in time and extended a hand in greeting. (Read the full interview here) 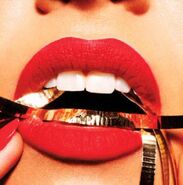